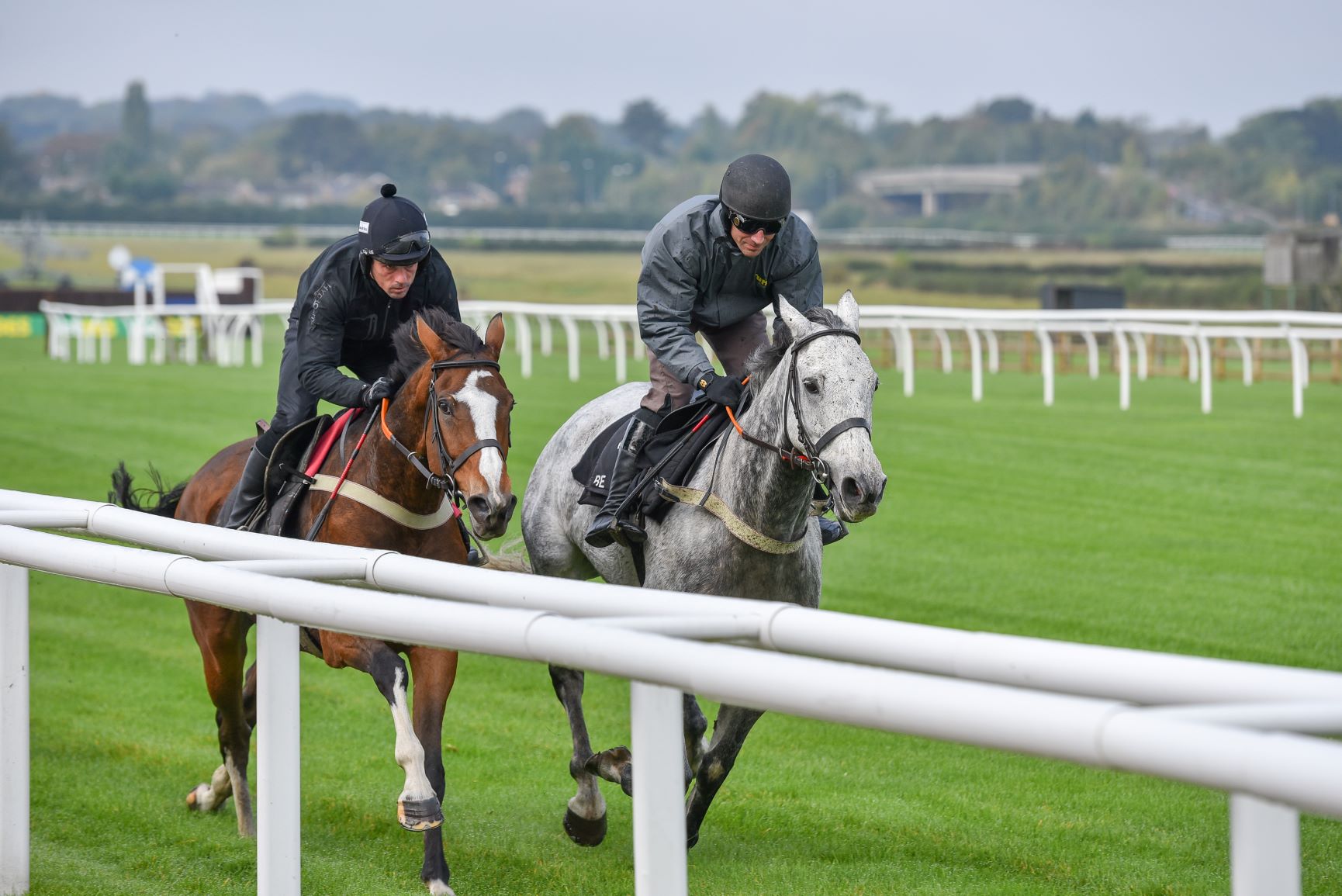 Jumping Into Action At Yorkshire’s Racecourses

Yorkshire’s equine stars turned out in force ahead of the jump season’s return to the county this Wednesday (October 16) at a special preview event held at Wetherby.

Yorkshire’s Grand National hopes continue to ride on Sue Smith’s Vintage Clouds who was an unfortunate first fence faller in this year’s renewal. He galloped with North Yorkshire Grand National winner, Sharp Response, both pictured at the top.

Jockey Danny Cook said of the grey: “He jumped the first fence at Aintree too well and came down steeply.  The plan is to run him in the Becher Chase in November to get some experience of the fences before another attempt at the Grand National.”

Danny Cook also rode Definitely Red in a racecourse gallop for trainer Brian Ellison.  The popular chaser is on course to secure back to back wins of Wetherby’s Charlie Hall Chase on Saturday 2nd November and Cook reported the horse to be in great form. Definitely Red galloped with stablemate Duke Debarry who goes for the Durham National at Sedgefield on Sunday.

Popular mare Lady Buttons joined the parade and has targets similar to last year, running over both hurdles and fences according to her trainer Phil Kirby.

“She is a star and without her we wouldn’t be where we are today.  We look forward to returning to Wetherby with her at the beginning of November, for a race she won last year,” he said. Another of Kirby’s horses, Top Ville Ben, who is also aiming for the Charlie Hall, looked in great form as he took part in a racecourse gallop with regular work rider Jenny Durrans. He worked with Whoshotthesherrif, a horse nominated by Phil Kirby as his one to follow for the season.

Malton based Ruth Jefferson paraded chasing star Waiting Patiently who doesn’t as yet have any specific plans but will run when the ground is right for him.  Last season he was brought to a standstill and unseated Brian Hughes, when Bristol De Mai fell in front of him in the King George at Kempton on Boxing Day.

Regular jockey Brian Hughes said: “Although we still had a mile and a half to go and I couldn’t be sure that he would stay, he was giving me a great feel.  We were going quite quickly over the first four fences but it felt like he was just doing a hack canter.”

He was accompanied by stablemate Mega Yeats and Ruth said that the five year old, who has been lightly campaigned, but won four of his six starts will stay hurdling.

With 38 fixtures across Yorkshire’s three jump courses, Catterick, Doncaster and Wetherby, there is plenty to look forward to. John Sexton, Chairman of Go Racing In Yorkshire said:  “Jump racing is an exciting part of Yorkshire’s fixture list.  We are looking forward to a brilliant season, which will feature some top class racing.”

Wetherby’s closed season has been used to carry out some behind the scenes work and prepare for future projects.  A new e-ticketing system has been implemented which is phase one of a new admission system which will result in the redevelopment of the main turnstile entrance building and entrance road next summer. In terms of ongoing maintenance, the canter track has been resurfaced, along with the horsebox park and the stables have been re-roofed. There is a new Peaky Blinders theme for the meeting on Saturday November 16 and the Christmas meeting, Thursday 26 and Friday 27 December, will have a traditional circus sideshow vibe.

Catterick Racecourse are looking forward to welcoming the national hunt crowd to their new weighing room and parade ring, which has been in use since June this year.  The £600,000 investment into facilities includes an extended Weighing Room complex, complete with a new warm-up area, state-of-the-art facilities and space to relax between races.

The enlarged Parade Ring gives racegoers an improved view of the runners and the Winner’s Enclosure has been incorporated into the Parade Ring, making it easier for racegoers to circulate. A new theme for Catterick’s jumping finale fixture is a Countryside Ladies Day on Wednesday, March 4, 2020.  There will be a fashion showcase, as well as a best dressed competition.

Their most prestigious race takes place in January, with the Watt Fences sponsored North Yorkshire Grand National. This race has been won by the Sue Smith yard for the last four years and would be quite a feat if the yard could make it five in a row.

Jumping returns at Doncaster on Friday, November 29 and 30.  The two day meeting will have a 1920’s styled Beer Festival across the two days, with music from Cheaky Blinders live after racing on Saturday. Looking ahead to December, Santa’s Great Giveaway will be back at the Festive Jumpers meeting on Friday and Saturday, December 13 and 14.

After Christmas, a Festive Family Fun Raceday takes place on Sunday, December 29 with activities for all ages to enjoy including the Markham Main Colliery Brass Band. Early next year a new winter jumps box package will be available.